Because of Frank Schmuck’s work at the grass-roots level to make a difference for his community, the entire state of Arizona soon saw the application of rubberized asphalt in many other, noise-sensitive locations. Sure many now claim the use of rubberized asphalt was a fait accompli. Well, they weren’t there. I was. Frank Schmuck made the difference.

Frank Schmuck, armed with his own study showing noise levels along a Tempe stretch of the Superstition Freeway exceed state standards, has come up with a few suggestions to ease the problem.

Schmuck, whose home is against the freeway’s walls, near McClintock drive, conducted a 24-hour noise study this month using a sound level meter.

The findings weren’t surprising, he says. The noise level ranged from 65 to 75 decibels, higher than the 64 state standard for freeways.

“It’s excessive” said Schmuck, who enlisted an Arizona State University teacher and other consultants to examine the findings. “Obviously the Arizona Department of Transportation is in violation.”

To reduce noise in his neighborhood Schmuck is proposing raising existing walls by three feet from McClintock to the Superstition’s intersection with Pima Freeway.

Other suggestions [he says are] include covering the walls with sound absorbing panels, using vegetation along the freeway and rubberized asphalt. 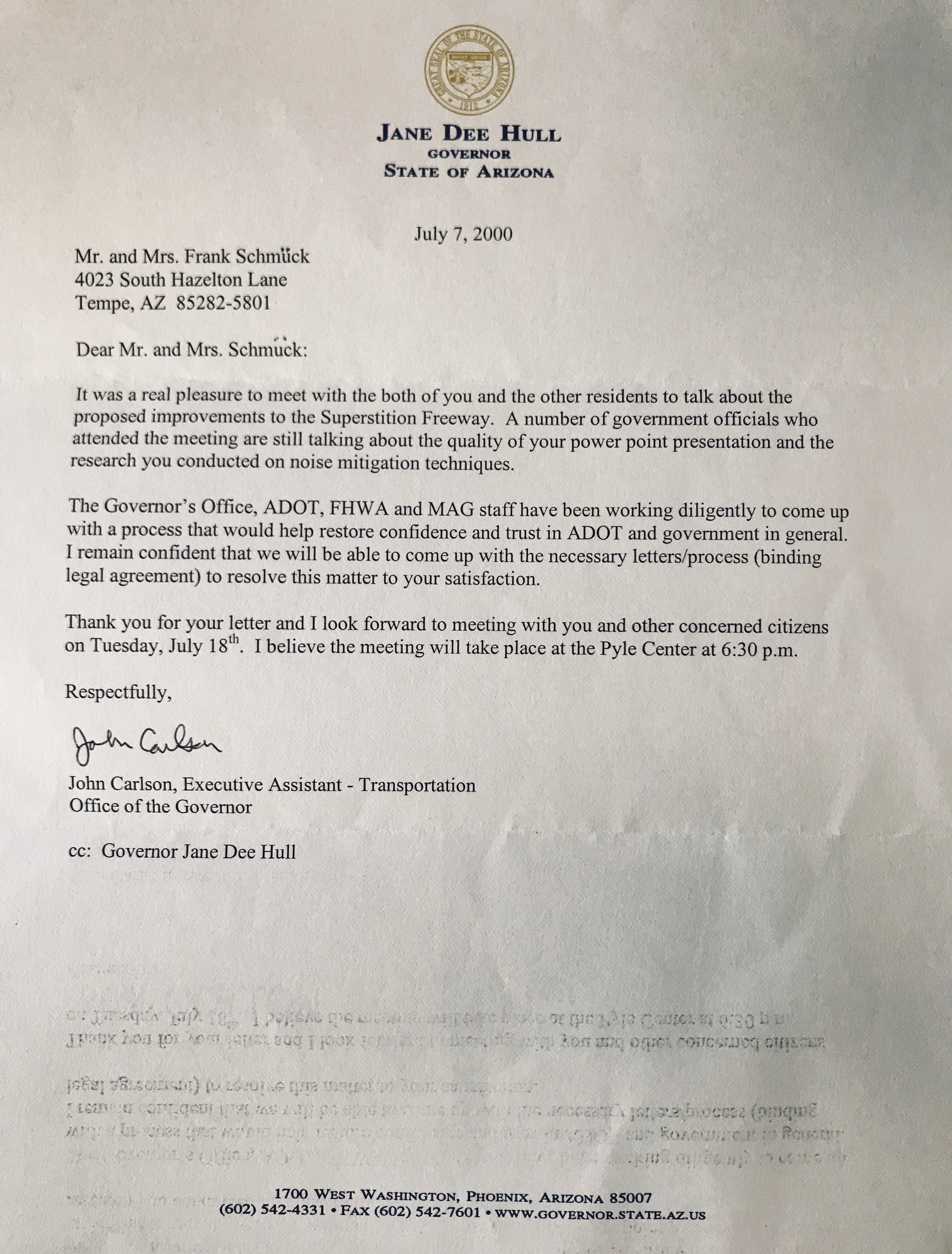 Because of Frank Schmuck’s work at the grass-roots level to make a difference for his community, the entire state of Arizona soon saw the application of rubberized asphalt in many other, noise-sensitive locations. Sure, many now claim the use of rubberized asphalt was a fait accompli. Well, they weren’t there. I was. Frank Schmuck made the difference. 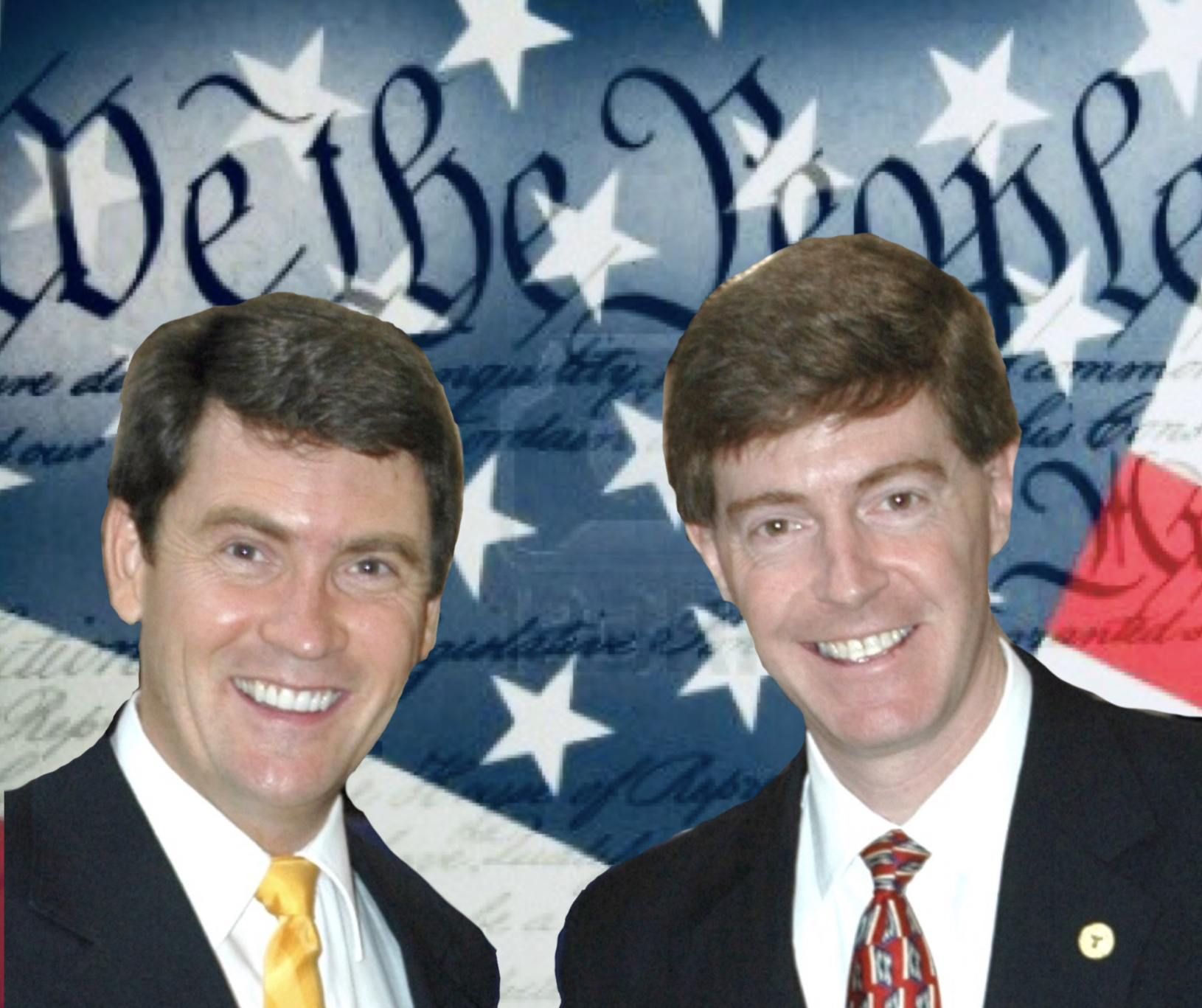 Before I was Mayor of the City of Tempe, I served on the City Council. We faced many issues at the time, including the recession that began in 2001. It was tough work. But it was rewarding, especially when we could work successfully to solve problems for our neighborhoods. Just such an opportunity occurred in 2000.

The Arizona Department of Transportation and the Maricopa Association of Governments had worked out the plan to widen the U.S. 60. Long before, the neighborhoods adjacent to the U.S. 60 had been promised that the corridor only would be used as a “parkway.” Then, as traffic pressures built and communities to the east of Tempe demanded more freeway service, the U.S. 60 became a wide freeway. In 2000, after further promises that the connection between the U.S. 60 and the proposed 101 freeway would be made by tunnels, it was revealed that tall flyover ramps would be installed instead.

Neighbors rightly were angry about the series of broken promises, but more they wanted solutions to the ever-increasing traffic noise bombarding them from the ever-expanding freeway corridor.

That’s when neighbors mattered most. As we were trying to find solutions to the increasing noise problems, it took a self-motivated, earnest neighbor to lead the way. 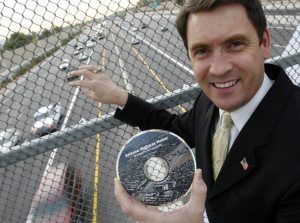 Frank Schmuck, an airline pilot with an engineering degree, used his own money and time, invested in professional-quality equipment, and conducted noise studies along the U.S. 60. His work proved that the freeway’s noise levels were out of compliance with state and federal law. But Frank didn’t stop there. He looked for—and found—the solution. Frank proposed that Arizona use the experimental technology, rubberized asphalt. Frank demonstrated, again using sophisticated equipment, his own time and his expertise, the magnitude of the difference that rubberized asphalt would make in this particular application.

It was Frank’s work that broke the log-jam. Yes, ADOT had been experimenting with the technology, and even the Federal Highways Administration was considering its use, but without Frank Schmuck’s work and persistence, and the application by a few of us of some significant political efforts, rubberized asphalt would not have been used to reduce the noise impacts on the neighborhoods surrounding the U.S. 60.